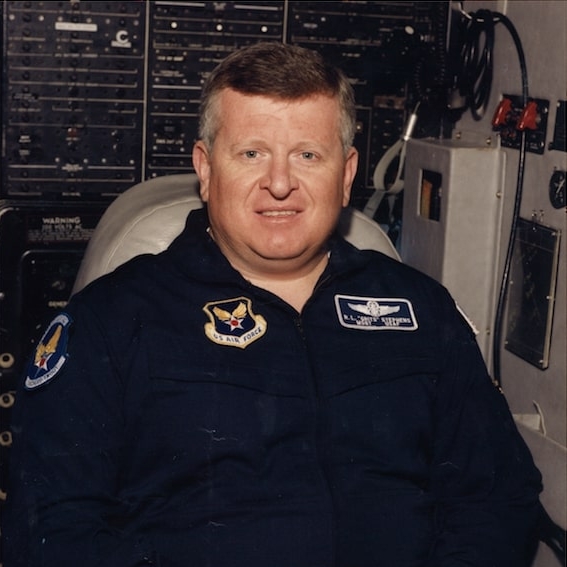 Grits was born on January 6, 1957 to Richard “Lamar” Stephens Sr. and Joann Stephens, formerly Holcomb, in Marietta, GA. He was the first of five children.

He was a 1975 graduate of Mary Persons High School (Go Dawgs!). After high school, he pursued his dream to serve our country and travel the world by enlisting in the United States Air Force in March 1977.

After graduating basic training, his first assignment was to the 436th Organizational Maintenance Squadron at Dover Air Force Base (AFB) as a C-5 Flying Crew Chief. In April 1981, he was assigned to Altus AFB in Oklahoma to attend C-141 flight engineer school. After flight engineer school, he was assigned to the 15th Military Airlift Squadron in Norton AFB, California. While stationed in Norton, he met his wife, Mome, and they had their first baby, Nikki, in 1990. While at Norton, he flew missions in support of the President, Thunderbirds, International Nuclear Force, and the National Science Foundation in Antarctica. He has flown missions in support of the Granada and Panama conflicts, along with Operation Desert Storm.   From 1992 to 1994, he was assigned to Detachment 1 89th Military Airlift Wing at Hickam AFB, Hawaii, where he welcomed his “pineapple surprise,” his boy, Ricky (RLS III). In Hickam, he was a Flight Engineer with the aircrew responsible for transporting the United States Indo-Pacific Command and Pacific Air Force/CC. In 1994, he relocated his family to Edwards AFB in the California desert, where he was the first ever flight engineer assigned to the 412th Flight Test Squadron, Speckled Trout. Along with a multitude of test missions, he has flown the Secretary of Defense, Chairman of the Joint Chiefs of Staff, United States Secretary of the Air Force, and the Vice Chief of Staff of the United States Air Force.   His military decorations include the Meritorious Service Medal, Air Medal, Aerial Achievement Medal, and Air Force Commendation Medal (2 Oak Leave Clusters).

After retiring from service in 1998, Grits relocated to Euless, TX where he worked as a ground school instructor specializing in the Boeing 777 at American Airlines until 2006.

Grits was preceded in death by his parents and treasured family pets.

He was very loved and will be missed dearly by his wife Romelia “Mome” Stephens of Euless, daughter Nikki Stephens of Dallas, and son Richard Lamar “Ricky” Stephens III of Euless; brother Hank Stephens and wife Susan, Jeff Stephens and wife Beth, sister Sandra “Bitsy” Stanford and husband Ray, all of Forsyth, GA and sister Melissa “Missy” Reynolds and husband RJ of Gray, GA. He was a beloved uncle to five nephews and two nieces. He was also loved and cherished by his extended family and friends around the country, mostly in Southern California and Georgia.

Due to the unexpected nature of his passing, the family has requested donations to his widow, Mome, to help cover outstanding health and living costs. To donate, please visit this link: https://bit.ly/2OUD5IU

To order memorial trees or send flowers to the family in memory of Richard Lamar "Grits" Stephens Jr., please visit our flower store.