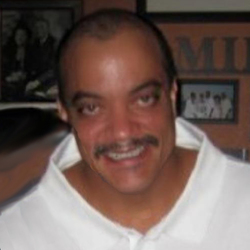 Raymond Joseph Calvey Sr. passed away peacefully Sunday, July 19, 2015, at his home, surrounded by loving family. A native of New Orleans, LA, “R.J.”, as he was known to family and friends, inspired all those around him through a lifetime of love, compassion, and friendship as well as a commitment to God, family, and Country. He enjoyed sports as a youngster and developed a love of music, eventually learning trumpet and playing in St. Augustine’s Marching 100. After graduation, the proud Purple Knight served in the United States Army four years and two additional years as a Reservist, earning the rank of Specialist. Upon leaving active duty, he began work for the Postal Service, a career that offered him the stability and opportunity that were the foundation of his standard of support for his family. In 2005, the devastation of Hurricane Katrina and the flood that followed influenced his and his wife’s decision to leave their beloved city of New Orleans and relocate their family to Fort Worth, Texas. R.J. found in Ft. Worth a new opportunity to continue his growth by returning to school at Texas Christian University, and he excelled in his studies there, earning a full scholarship and many academic accolades.

R.J. was an outspoken man whose experience and communication skills came across as sincere and honorable, even as his style ran from cool, collected and sympathetic to scathing hot with accurate, sharp criticism. He wasn't the type to back down from a fight, but he was also never the type to back away from an embrace; those who knew him will remember his fire and his gentleness with equal fondness. He was a great guy to have on your team, whatever the game. He was blessed with a tenacious spirit, and an uncanny ability to get to the bottom of a situation, even when details were hidden. His sharp acumen often put him in the position of mentor and confidant, which he accepted with confidence and patience. He was often quoted as saying that his primary purpose in life was to be the best father and husband that he could; this obligation was ordained by God and integral to his faith. His dedication extended beyond his immediate family, as he encouraged others to their best and brightest outcomes, often leading and offering guidance through example. These facts were clear in his final battle with cancer, as he again gave his family and friends a humble example of bravery in the face of an insurmountable enemy. His continued charm and graceful demeanor were an inspiration to all around him, even as he succumbed to the illness.

R.J. has now joined his parents, Raymond and Esther Calvey, in the sweet joy of a closer walk with the Lord. He is survived by his loving wife, Donna Calvey, his four children, Tory, Raymond Jr., Raychelle and Justin, his sisters, Debra LeBeouf, and Ramona Calvey, and his brother, Ferdinand “Pete” Calvey.  His legacy also includes numerous family and friends who enjoyed his generous heart, his no-nonsense integrity, his noble spirit, his wonderful sense of humor, and his faith in Jesus Christ. We love and miss you R.J.

To order memorial trees or send flowers to the family in memory of Raymond Calvey, please visit our flower store.